After two days of skiing and no rides this year, I was itching to go out for a ride. A little more snow and searching for a house has restricted my riding time this year (other than going to work) so hitting the roads this weekend was a mental health imperitive. Rita agreed and just about forced me out of the house. So a posting on Sport-Touring.Net by Justin was right on time. I also wanted to test the new Rammount I bought for the GPS.

Saturday morning and I was up before the alarm went off. Yep, I wanted to go. I got ready, grabbed some breakfast, geared up and generally got ready to go. I mounted the GPS, snagged the camera, put the cell into the leg pocket, kissed Rita goodbye and backed the bike out of the garage. It's a nice, crisp and partially cloudy morning. Virtually no one is out running around this early on a Saturday.

I'd noticed a white panel van going to my left as I backed out. I plugged in, got the gloves plugged in a on, closed the garage and watched as the van came up behind me. I decided to hold on a moment to let him go by (the traffic lights can be sensitive so having someone in front of me will guarentee the light will trigger). And he blew right through the stop sign. Didn't even look and made a left towards the light. Good thing I waited for him. I pulled up to the stop sign, put my foot down and made the left. As I came around the curve, I could see the light was red. The van was making a left (same way I was going) but he was way over to the right, then he made a left without even stopping for the red light. I'm real glad I let him go first. The light changed moments later and I zipped by him making the next light just before it changed. He appeared to have stopped for that one and I headed off to Morrison.

I got up to 128 and headed off to 93 south. It's a nice little route that avoids the Rt 25/70 traffic. Sometimes it can be busy but there are spots where it goes to passing lanes and there are passing zones so you can be a little spirited. Since I can't figure out where 93 connects with 6, I generally get on to 470 S and spurt on down the couple of miles to the Morrison exit. Today's no different and it's nice to get a little speed going.

As I roll in to the Conoco at Morrison, I see a lone bike in the parking lot. Generally there are a few groups and a bunch of bikes waiting on a days ride but perhaps the cold weather and potential for afternoon thunderstorms has cooled off some of the riders. I grab some gas ($2.41 a gallon; still cheaper than up by my place at $2.49) and back the bike up next to the Black DUcati Multistrada. It's Blake sitting on the bench. No sign of Justin though (it's 5 of 9am). I snag a soda and pastry and we chat for 10 or 15 minutes before Justin rolls up on his Blackbird. 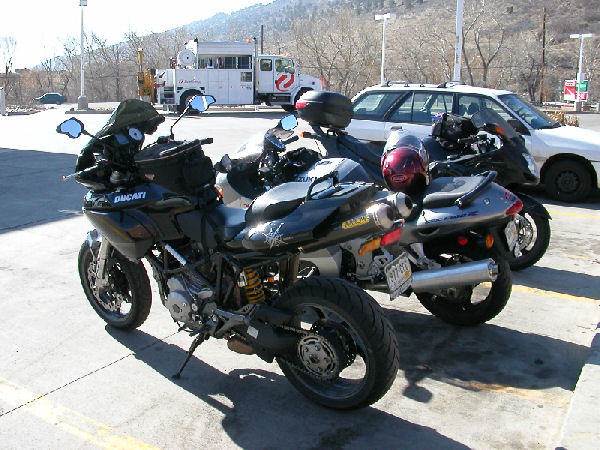 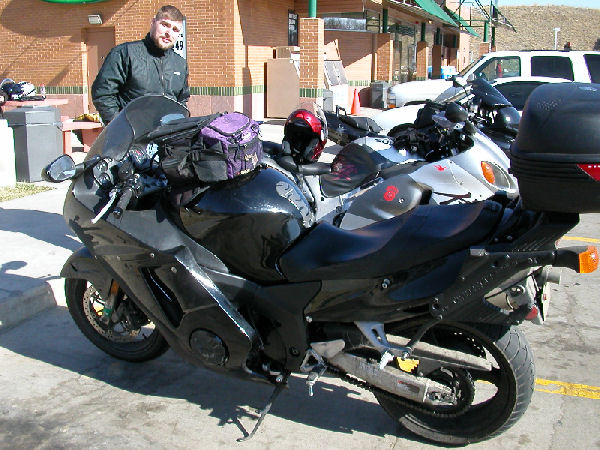 Justin and his Blackbird

Justin grabs some coffee and we shoot the breeze waiting to see if any other STN'ers will be arriving. I'd tried to log in when I got up but STN's been having troubles lately and I wasn't able to connect. While we're sitting there waiting, a guy shows up on a Yamaha. Helmet and jacket but tennis shoes and jeans. No mirrors on the bike either. We also chat for a moment before he heads inside. He's not here for our ride but at least another bike's shown up.

At 9:30 or so we gear up and head off. First is the ride up to Evergreen. There's sand in many of the corners and at one of the turns after seeing that no one was coming I let the bike ride the centerline briefly instead of the potential of sliding the backend out from under me. The rest of the ride up to Evergreen is reasonably spirited considering the conditions of the road. Justin's taking it easy. Don't want to have any of us wash out.

One of the things I notice is how easy it is to move around on the Hayabusa. I've been practicing shifting my weight on the bike. Since the lines are pretty narrow due to the sand, I'm able to adjust quickly to the tight track, slightly shifting my weight or a touch on the throttle to maintain the line. Due to an accident several weeks ago where I slightly sprained my left wrist and and spill while skiing where I landed on my right thumb (it's a little swollen), I haven't been able to do any weights at the gym so being able to throw the bike around so easily is a little surprising and satisfying.

A left turn and we head south towards 285. Traffic is pretty light but the roads here are in dismal shape. Lots of bumps and ruts. At Conifer we make the right and head down to Pine Junction. A left on 126 and the road's clear again. It's a nice spirited ride again with lots of care in corners. Never can tell when a bit of sand or gravel will be in the corner and there are bicyclists out as well. Going through Pine was again uneventful. A sportbiker was parked in front of a store. We waved as we went by and he waved back. 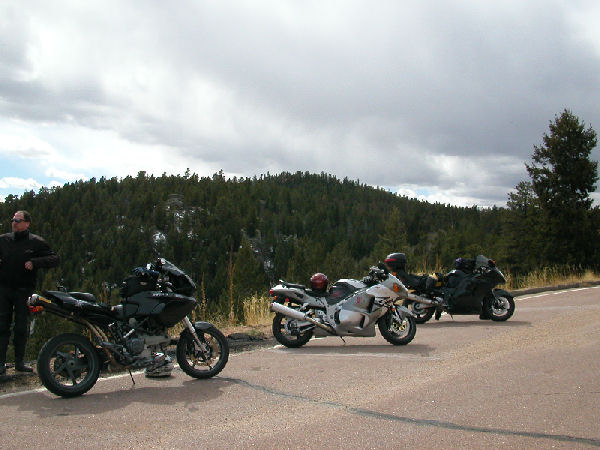 Blake and his Multistrada, Carl's Hayabusa and Justin's Blackbird 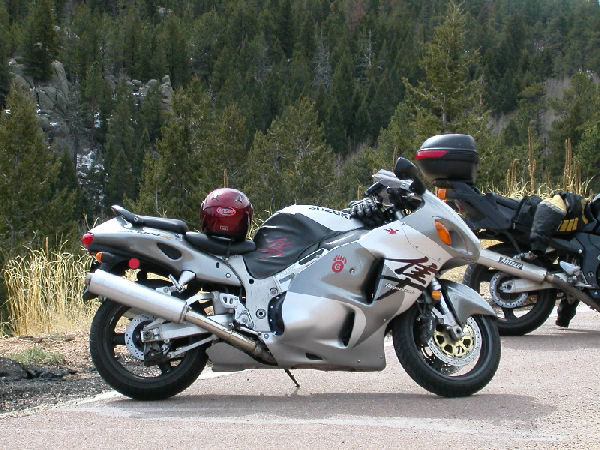 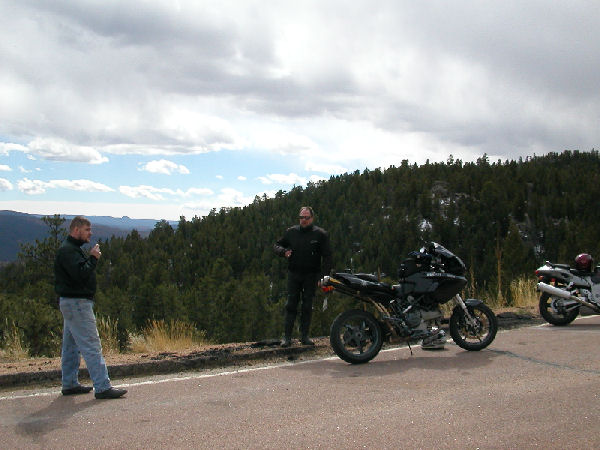 Blake and Justin. Getting cloudy down south. 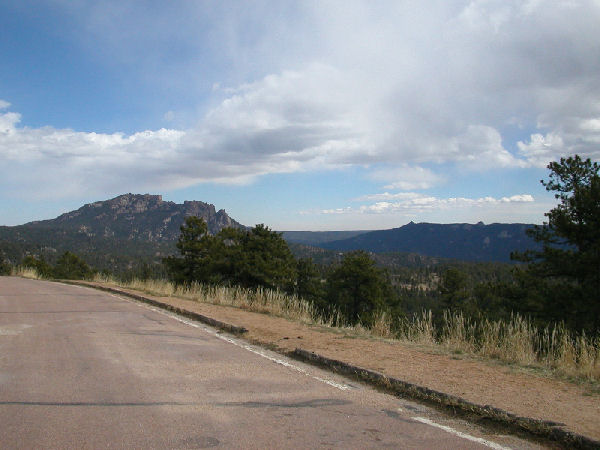 Shot to the north

We stopped in what appears to be the normal spot when heading down towards Decker. A little turnout where we all park and shoot the breeze again. A few flakes of snow dribble down and it's a bit on the chilly side after being plugged in to the Gerbings. But after a bit, we hop back on the bikes and head down towards Decker. Blake suggested heading over the dirt road north of Deckers to Sedalia. When we reached the four lane part of 126 we wicked it up a bit. A little joy de verve. We slowed down again though to let Blake catch up and continued on. Upon reaching Deckers we made the left and headed north.

Rt 96 is in worse shape than then other roads. Narrow and many corners have lots of sand forcing us to slow quite a bit in places. Lots of fisherman on the river (Platt?) with hip boots. Hope the fishing is good today. According to the signs, a bridge is out ahead. When we reach it though, it's just dirt covered and not really "out" (as in, we didn't have to ford the stream when we got there :) ).

At the turn to Sedalia (Rt 67), we make the right and head up the dirt road. It's not that bad and I again test the theory that if I slide my butt from side to side in corners, I'll be able to take the corner a little faster because the bike's more upright. Less angle equals less chance of sliding. It seems to work pretty well. There are several washboard spots but there are just as many solidly packed portions (almost paved in consistency). About two thirds of the way down, we start to encounter traffic again. A Subaru at one turn and we followed behind a pickup until the end of the dirt road. He was nice enough to pull over for us once we reached the pavement for which I gave him a wave and we headed off.

As we headed down the mountain, we hit the one 10mph curve again with care. Even so, there was enough sand and gravel that again I went over the center line and again, I was aware that no other vehicles were coming so I didn't push it.

When we reached Sedalia a train was cutting through town. We waited a few moments when Blake decided to see if we could ride parallel with the train and find a cutover or under. Unfortunately a dead end was reached so we turned around and waited until the train passed. We paralleled 85 for a few miles and then hopped up on 85. As we approached 470 Blake made a right turn and we waved him headed home. At 470 Justin went across, we waved and I made the left to get on 470.

I got off at Morrison as I wanted to follow 93 up and figure out where it came out so I could come down by surface streets and avoid 470 the next time. I thought I found the turn but kept going on 40 until I reached 6. I believe I found the turn but will have to try it next time I'm heading that way. The rest of the ride home was nice and smooth including the lovly high speed run on 128 (there's a 100 MPH curve that's just sweeeeet).

Thanks go to Justin for organizing this spur of the moment ride and to Blake for coming along. His Multistrada is a beautiful bike.