I was of two minds as to whether I wanted to ride today or not. It was a nice day but I had some maintenance I really needed to do on the Hayabusa after my trip last week. About the only thing that really inspired me to go was that one of the CO-HSTA guys might show up on his '75 CB360T. I'd owned a new 76 or 77 CB360T as my first new motorcycle. 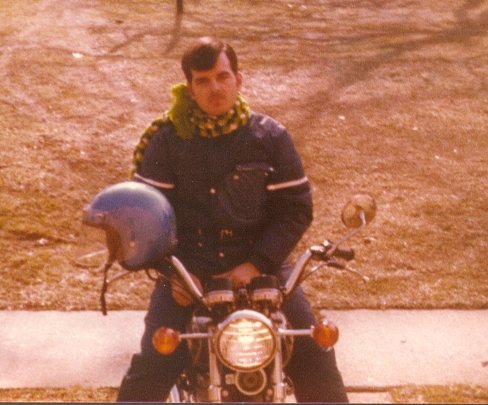 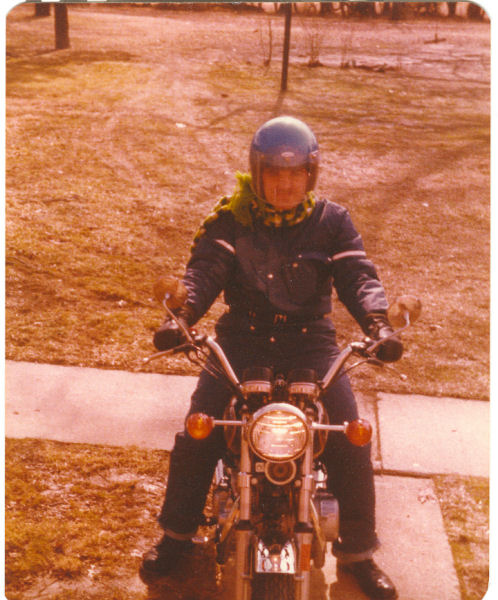 So Saturday morning rolls around and I make the decision. Off I go :)

I decided to hit 93 instead of going down 25 like I normally do. Unfortunately when I got to Golden I missed the turn and found myself heading towards Denver. Bah, I turned around and got on 70 then up to 470, around the loop and on down to the standard meeting place. The Conoco at Morrison. I bet these folks love us :)

There appears to be two other groups waiting to go as well. The two cruisers on the left and the bunch of sportbikes. We're over on the other side of the pumps.

Here's part of the group.

And here's another part. That's Carl on the left (bogie on stn) and Josh leaning on his bike (joshloveland on stn) next is Neal, an old time CO-HSTA member. Sorry about not remembering names though. One of these days I'll get that memory implant and I won't forget again :) The guy in the center is riding an old Suzuki though if that helps :) Steve had his video camera so I'm looking forward to some good ride shots.

We headed off through Morrison to Rt 8 and down to 285. It was a nice pace, not too fast. I kept back just a little trying to keep from overrunning the next guy up. I'm getting better as a group rider :) We made the left turn at the Pine Junction turn and headed towards Decker. There are some pretty decent curves and I was able to take them with a little speed, hanging off to the left and right. I don't much like curves less than 20mph but 20 and higher are nice and let me push it just a little.

We got to Pine Junction and of course slowed down just a tad. Gotta watch the sheriffs in the small towns :) On the other side we caught up with a few cars so we were a little slow for a short time then we were able to pass and get moving. We got up to a pullout and stopped to let everyone catch up and take a break.

I chatted with Josh who made the comment that I was really taking the curves well. A proud moment. We talked briefly about my learning how to take curves better and then ranted a bit about scripting :) I'm such a Unix geek.

I'd seen Charlie's CB360T back at the Conoco but didn't get a pic. I didn't see it until we were getting ready to go. Now I was able to get a couple of good pics.

At the turn out, I was a little slower getting ready so I was farther behind the pack. When we got to the place where the north bound lanes were two lane, it has a nice set of sweeping curves. Easy enough that I was able to pull out my camera and get a few shots of the group. Of the three I took, I think this one looks the best.

The group continued on into some better curves, a little faster. At one point, the rider in front of me seemed about to miss the curve (a little shaky on the corner). I felt I was a little close and backed off a few extra feet. I didn't want to get involved in an accident if he missed a corner. A little farther on, the guy on the Suzuki missed the corner and went over the double yellow.

With the comments from Josh, I was tempted to see if I could offer some advise but then I reconsidered. I really didn't want to come off as a know-it-all or to offer unsolicited advise. I have this rule in the gym. If someone is doing an exercise incorrectly I won't comment. I mean, it could be that they're working out a specific muscle group or have a different goal in mind. Doing an exercise with quick movements builds muscles differently. On my rides, I know I occasionally miss a turn due to inattention or like the less than 20mph turns, I'll panic sometimes and even stop the bike. But not always. Anyway, so I didn't make a comment (well, until now).

The rest of the ride to Woodland Park was pretty cool. The traffic picked up a little so we weren't able to pick it up much. We stopped at a station to gas up. About 6 bikes got gas and we headed down to The Hungry Bear for brunch. Steve had called ahead and arranged for 12 seats for 12 to 12:15. Turns out we arrived almost right at 12.

I sat with Blake (blakebird on stn), Thor (thundergod on stn) and the guy with the Suzuki. We all chatted and had a great breakfast. Always nice to chat with fellow enthusiasts :)

After lunch I got with Charlie and he let me ride the Honda around the parking lot. Now that was pretty cool. He even snapped a few pics for me.

Most of the rest of the riders were going to continue on down 24. I wanted to head home since I had some maintenance things to do. Charlie said he was going to head down to Powell Lake and see if the lower altitude would help with the engine. He'd been able to get to 85 on 285 but the poor 360 was lugging a bit on the mountain roads. Other riders, like Blake, also had things to do too. By the time I got geared up everyone else had bailed. I got out on 24 and headed back towards Deckers.

As I started heading up 67 I saw way up ahead, an orange jacket which looked suspiciously like the back of Charlie. As I got closer, I realized it was him. I got up behind him and pulled out my camera to get a couple of shots.

I beeped a couple of times as I passed and waved and headed off. After about 15 minutes I decided to locate a spot and see if I could capture a quick movie of Charlie on the Honda as he went by. I pulled over at a dirt pullout, hopped off and pulled out my camera. As he approached, I started the camera (which only has a 15 second silent mode video). It looked like he was going to pull in so I gestured for him to continue so I could complete the capture.

I was getting ready to get back on the bike and head on home but Charlie turned around and came back. He'd mentioned that he'd like to take the Hayabusa for a ride in exchange for the ride I got on his Honda. I had no problem with this and he offerred the Honda to ride while he took the 'busa for a spin. We planned on exchanging bikes again in Deckers. Damn straight!

I advised him that it had a light throttle and off we went. It was great fun riding on the Honda again. It vibrated heavily, no acceleration at all, the 9,000 rpms were a suggestion as I couldn't get it past 6,000 even going down hill, but it was a metric buttload of fun. I checked out the instrument panel, the front wheel, the speedo cable, the gas tank, basically reveled in the experience.

After a few minutes, I caught up with the BMW rider that'd passed us while we were in the turnout and hung around behind him. I remembered the tires were stock but even so, I couldn't help trying to slide my butt left and right on the curves to keep the speed up since slowing down meant I had to try and speed up again :) I was able to keep the speed up and managed to get to 65 or so. About a half mile from Deckers, I waved Charlie by to let him open up the 'busa. He went by but a minute or so later he pulled off to a dirt turnout and we swapped bikes again.

Charlie, if you're reading this, you made my day today. Thanks.

I hopped on the 'busa, revved her a bit and headed on.

I caught up with the BMW again and at the three lane I went by with a wave. It was loads of fun hitting the twisties on the way back. I went through Pine Junction at the proper speed (gotta watch them sheriffs) and started to open her up on the other side. There was a car in front of me and at a good point, I went by. But a minute or so later an oncoming car flashed their lights at me. I slowed down just as I spotted the sheriff's car on the side along with a couple of cars and several bikes. There was a guy laying on the side of the road with a couple of people bent over him. His helmet was still on. There were four or so cruisers and it looked like one of the members of our group (the green Kawasaki; but maybe not). Hope he's (or she) going to be ok. That sucks. Bad way to end a ride.I gestured the "slow down" sign the rest of the way to 285, made the right turn and headed home.